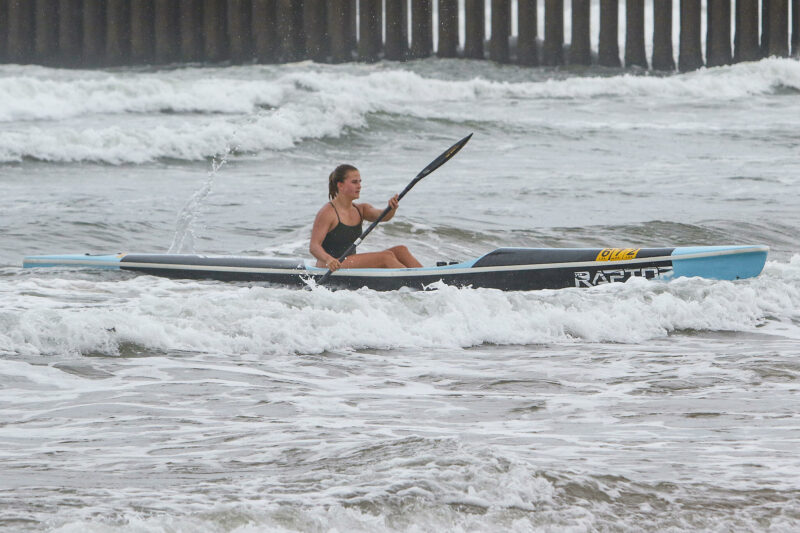 The weather and ocean conspired to deliver tough conditions for the participants in the Ocean Heroes at a blustery Dairy Beach on Sunday, with ironman ace Luke Nisbet mastering the conditions to claim to prestigious Gold title.

The endurance event consisted of a return swim to South Beach, followed by a ski leg to the harbour wall, a run along the boardwalk to the harbour wall and back, and a malibu board paddle to Marine SLC and back to Dairy Beach, made tougher by the blustery weather and choppy ocean conditions.

The event attracted the cream of the regions lifesaving talent, and aspirant young oceanmen and women for whom completing the endurance event was a major achievement.

“Conditions were tough today,” said Nisbet. “A lot of guys were trying to use the piers and rips to get out.

“I struggled a bit in the swim, especially coming back because it started as a north easter this morning and then changed back to a south wester.

“There was a lot of chop and a strong current, which made the swim leg the hardest leg,” said Nisbet.

Hockly came into the event off the back of her success at the surfski worlds in Portugal and her overall win the Pete Marlin women’s surfski race in East London last weekend, but said she had underestimated the demands of the Gold event.

“To be honest I thought I could not train for this and kill it, but this is not something to take lightly,” said Hockly. “Doing a full ironman is super tough!

“I am an endurance athlete so I really enjoyed the format of the event,” said the Umhlanga teenager.

She said that, despite the conditions thrown at them on the day, the depth of the field had excited her.

“A lot of people showed up to compete that I didn’t really know were part of our sport!” she said. “It was great to see everyone coming together to support the event.

With her skills in the lifesaving disciplines Hockly was caught off guard by the testing conditions at Dairy Beach on Sunday morning.

“I looked at the forecast, but then I was surprised by how big the surf was when we got here,” she said. “It brought a great aspect to the event because you needed to bring your wave skills and surf skills. A lot of people got hammered going out!”

“It puts the surf lifesaving into the sport when you have gnarly conditions for a change,” she added.

The first senior woman home Lara Edward, who said she took full advantage of an unexpectedly clean launch of her surfski leg.

“I took a line right against the pier and it worked really well, as I got a clean line out.” she said.

“The seven kay run was quite far, I am not going to lie,” she added. “I just tried my best.”

The junior men’s honours went to Tyne van Achertbergh, who said the whole field had battled with the wind offshore.

“Those were testing conditions! It was bumpy and blew you out to sea a bit much,” he said. “The surf was big going out on the ski leg, and quite a few of the guys had to swim back. I also got stung by a jellyfish,” added the tough youngster.