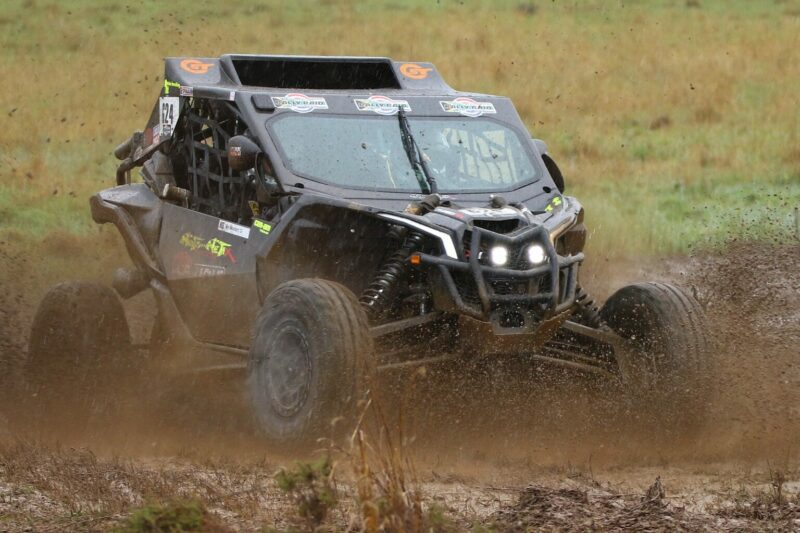 The Parys 400, the seventh and final round of the South African Rally-Raid Championship that took place on Saturday, 12 November, turned out to be yet another extremely challenging event as torrential rain and a flooded route resulted in changes to the race that was the final title decider of the season.

With Round Six the previous day already shortened to a 12 kilometre Pirelli Qualifying Race and one 98 kilometre loop, the final championship decider on Saturday followed after more torrential rain that drenched the route. According to competitors, the extremely wet conditions of the weekend after persistent heavy rain leading up to the event, made it almost impossible to race, and the organisers had no choice but to shorten the race distance for the final event to a 12 kilometre qualifier and an 86 kilometre loop, which included a 16 kilometre de-controlled section.

With only 27 starters in the Production and Special Vehicle Categories after the sixth round the previous day, teams set off on the qualifier with Gareth Woolridge/Boyd Dreyer (NWM Ford Castrol T1+ Ranger) posting the fastest time followed by Shameer Variawa/Danie Stassen (Toyota Gazoo Racing DKR Hilux T1+); the Horn brothers, Johan and Werner (#TeamHilux Rally-Raid DKR T1+); the second NWM Ford Castrol T1+ Ranger in the hands of Lance Woolridge/Elvéne Vonk and Giniel de Villiers/Rodney Burke (Toyota Gazoo Racing DKR Hilux T1+) who rounded off the top five with only 19 seconds covering the five frontrunners while the leading 12 teams finished within the same minute.

In the Production Vehicle Category, the FIA T1+ title was still to be decided with the defending champions, Henk Lategan/Brett Cummings (Toyota Gazoo Racing DKR Hilux T1+) claiming the victory the previous day ahead of their team-mates and title challenger, De Villiers accompanied by Burke, who was the stand-in navigator for the injured Dennis Murphy, for the final round.  Lategan/Cummings completed the Pirelli Qualifying Race in ninth place and with the leading 10 teams drawing for their starting positions, the defending champions were off in second place, just behind their team-mates, Guy Botterill/Simon Vacy-Lyle with De Villiers/Burke pulling away in fifth place while the winners of the qualifier started from fourth.

A drenched and extremely slippery and muddy route was not something to look forward to, and competitors had their hands full to keep their vehicles on the road and to make the best of the atrocious conditions.

A first overall victory and FIA T1+ win of the season eventually went to Gareth Woolridge/Dreyer who edged out De Villiers/Burke, but the runner-up result was enough for De Villiers to claim the overall and FIA T1+ title. There was, however, disappointment for Lategan/Cummings who were forced to retire due to alternator issues and the power steering belt dislodging due to the wet conditions.

The third place went to Chris Visser/Albertus Venter (Red-Lined Motorsport REVO) who were the FIA T1 victors. It was once again a tight battle at the front with a mere 98 seconds separating the first four teams at the finish. Botterill/Vacy-Lyle rounded their season off finishing fourth overall and third in FIA T1+ while the FIA T1.2 victory went to the newly-crowned class champions, Lance Trethewey/Leonard Cremer (King Price Xtreme CR 6) who were fifth.

The Horn brothers finished sixth overall followed by Johan de Bruyn/Gerhard Schutte (Red-Lined Motorsport VK56) who added a runner-up result in FIA T1 to their victory the previous day. The new FIA T1 champions, Eben Basson/Leander Pienaar (#TeamHilux Rally-Raid) pulled out a stuck Woolridge/Vonk and were eighth, rounding off their season on the third step on FIA T1 podium while Thomas Bell/Wade Harris brought their Red-Lined Motorsport REVO home in ninth, just ahead of their team-mates, Philip Botha/Roelof Janse van Vuren (VK56) who completed their SARRC season with yet another finish to keep their scorebook unblemished.

There were also finishes and points in the bag for Nicolas Pienaar/Carl Swanepoel (Super Energi Race Fuels Red-Lined VK50) who were 12th followed by Woolridge/Vonk with Johan van Staden and his son, Sean (KEC Racing Renault Duster) claiming their second consecutive Class T victory. Their title rivals, Jayden Els/Armand du Toit (King Price Xtreme Renault Duster) could not complete Round Six the previous day, but a runner-up result in the class championship at the Parys 400 final, gave them the championship title.

Special Vehicle Category – The brave warriors with no windscreens

In the Special Vehicle Category, Trace Price Moor/Shaun Braithwaite (TipTop Milk BAT Venom) added another overall and Class A victory to their wins the previous day with Lood du Preez/Chris Visser Jnr (Farmers Meat Stryker) finishing second overall and in Class A. It was another real challenge for the open-wheel vehicles in Class A, Class P and Class G in the treacherous conditions with these vehicles not having the luxury of a windscreen, wipers and windows.

After making their SARRC debut at Round Six of the Parys 400 the previous day and finishing third in Class G, Gideon Jacobs/Richard Vardy Jnr (Moto-Netix Racing Can-Am Maverick) took it one step further to claim the top step of the Class G podium while they added more silverware to their collection finishing second overall in the Special Vehicle Category. They were followed by team-mates, Glen Theron/Craig Galvin with the outgoing Class G champions, Cecil and Elardus Larney, rounding off the class podium and finishing fourth overall.

There was disappointment for the father and son team of Werner and Ian Mostert (Moto-Netix Racing Can-Am Maverick) who could not reach the finish while the only Class P starters, Quintin Lessing/Noel Acton (Century CR-T) could also not complete the race.

The 2022 Parys 400 will be remembered as the wettest race in almost two decades and brought back memories of the Carnival City 400 in 2003, while it was more than likely the first time in the history of the modern racing series that organisers were forced into the extreme changes to the race and routes. Although it was a challenging way to round off the 2022 SA Rally-Raid Championship, it definitely added to a highly successful and memorable season.