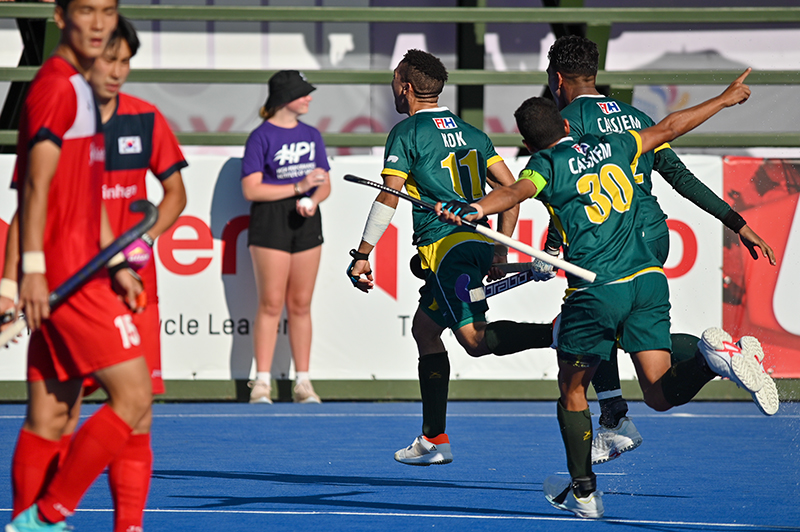 In the inaugural FIH Hockey Nations Cup Semi-Finals South Africa, the hosts, met up with the Pool B winner Korea for a place in the final and a chance to take on Ireland for a spot in the FIH Hockey Pro League. It was a game that marked Keenan Horne’s 100th test cap for the South Africans and they were looking to give the long-time servant a special game for the milestone.

South Africa won the penalty corner early after work from Tevin Kok and Dayaan Cassiem. Connor Beauchamp stood up and connected with pace but fired the ball over the goal. Korea had a chance through Hwang, but his shot was superbly diverted by Estiaan Kriek over the top of the goal.

Korea was looking more dangerous and creating circle entries without any significant outcomes in the early exchanges of the third quarter. However, having ridden out the pressure the South Africans won a penalty corner with more good work from Cassiem and Sherwood. But Guy Morgan fired wide. A highly cagey affair ended with no goals as both teams took to the dugouts for the break.

The second half came to life brilliantly. The South African racing snakes were causing trouble for the Koreans and when Julius laid a ball across for Tevin Kok the hitman finished off superbly into the bottom corner to give a home crowd much jubilation.

Korea won their first penalty corner of the game halfway through the quarter but the South Africans immediately referred and the call was overturned. Brad Sherwood collected brilliantly on an aerial through ball but the challenge from the Korean defender was well timed. Korea then won a penalty corner with a good use of their own referral, but tournament top goal scorer Jang fired it wide to the relief of the home crowd.

Brad Sherwood was running off the back shoulder of the defenders and was causing problems for the Koreans. He had a chance which he hit with incredible velocity and the resultant save from the Korean keeper led to a substitution for the man in goals.

Korea won a second penalty corner, but this time Jang was denied by a good save from Estiaan Kriek. And Kriek made another save to deny as 12 minutes remained in a tight tussle.

Korea continued to put the foot down and were rewarded as the South Africans sat deeper, they won the penalty corner and the golden opportunity to level and they took it through Jang! 1-1 with just 8 minutes remaining.

With six minutes remaining the South Africans won a penalty corner through Mustapha Cassiem. But the shot was narrowly wide of the goal by Connor Beauchamp. Korea then created a wonderful opportunity but just went wide. Three and a half minutes were left before the game would be decided by a shootout.

South Africa found the back of the net with 56 seconds remaining on the clock but there was uncertainty, and the decision went up to the television umpire. But eventually it was rulled the whistle had blown before the ball crossed the line and the goal was disallowed with a penalty corner awarded. A re-award followed as tension rose dramatically including another referral. This time the change up was used and Korea saved it which left the game to the agony of a penalty shootout to decide the winner.

Dayaan Cassiem went first and missed but Anton van Loggerenberg was subbed on and saved the first one. Next up was Brad Sherwood who showed the same composure as he did in the African Cup final to fire South Africa into the lead but Korea levelled immediately. Ryan Julius then saw his shot saved giving Korea the chance to take the lead, which they spurned and it remained level.

Tyson Dlungwana stood up and gave the South Africans a 2-1 lead but Korea levelled immediately to take it to sudden death. Mustapha Cassiem gave the South Africans the lead and the opportunity for Anton van Loggerenberg to be the hero and seal a spot in the final. Van Loggerenberg pulled off the save and the Koreans immediately reviewed the play and a stroke was awarded.

Cometh the hour, cometh the man! Anton van Loggerenberg pulled off the save and South Africa had the win and a place in the final!