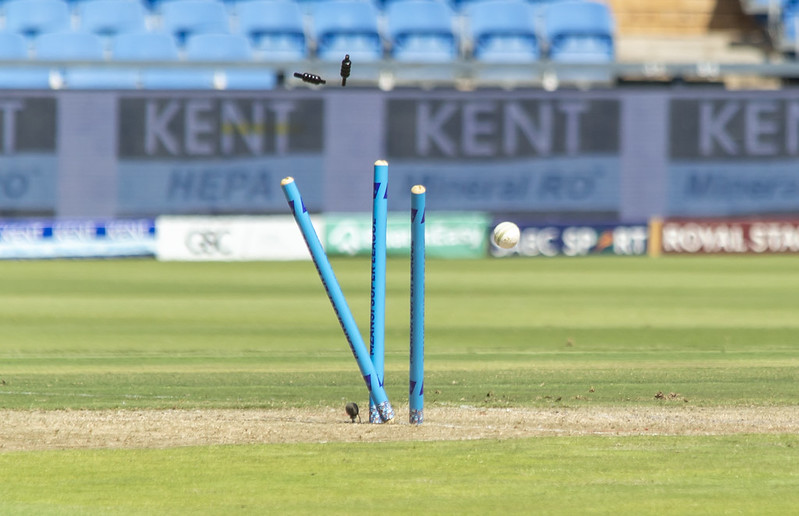 After opting to bat first, half centuries from Lesego Senokwane (79) and Heino Kuhn (96) powered the hosts to an innings score of 268/10.

Dragons were steady on 251/6 after Kuhn’s dismissal in the 44th over, caught by Gihahn Cloete off Migael Pretorius. A few deliveries later, Pretorius sent Shaylin Pillay packing with just one run and that began the collapse for the home team.

Alfred Mothoa (3/46) did the rest to dismiss Eldred Hawken and Kerwin Mungroo for none, and Renaldo Meyer with 11 runs.

Pretorius (4/36) had a good day out, also claiming the early wickets of Wesley Marshall for four and Grant Mokoena with eight runs.

Dragons bowling unit remained intact, taking wicket at regular intervals to restrict the Knights to 159 all out in 41.3 overs.

Kerwin Mungroo (2/39) registered the two wickets of Gihahn Cloete (7) and Nhlakanipho Mpungose (14) whilst Nealan van Heerden (19) was run out by Kuhn.

Bradley Porteous’s century rescued the visitors in the onslaught delivered by the hosts in the opening overs.

Mihlali Mpongwana (2/20) continued the attack when he claimed two wickets in the 14th over to see off Jason Smith with seven and Andile Phehlukwayo without any runs.

Porteous and Eathan Bosch (45) combined for 113 runs as Dolphins finished the innings on 226/9.

Western Province had elected to field first, a decision that proved well after Nandre Burger (3/41) removed Tshepang Dithole for none and Jon Jon Smuts for three in his opening overs.

Beuran Hendricks (2/23) was clinical in his ten overs, claiming the wickets of Porteous and Grant Roelofsen with two runs.

Edward Moore (94 off 115) steadied a 73-run partnership with Jonathan Bird (51) as the hosts comfortably chased 226 with five balls to spare.

The Momentum Multiply Titans and Dafabet Warriors went head-to-head in Centurion after losing their opening encounters on Friday.

Openers, Jiveshan Pillay (69) and Dewald Brevis (45) set a solid start for the Titans, putting up 75 runs before the fall of the first wicket.

Ziyaad Abrahams (4/69) was the most successful bowler, claiming the wickets of Markram, Ferreira, Junior Dala (7) and Aaron Phangiso without any runs.

Half centuries from Tristan Stubbs (63), Lesiba Ngoepe (55), Jordan Hermann (55) were not enough as Warriors fell 23 runs short of the target.