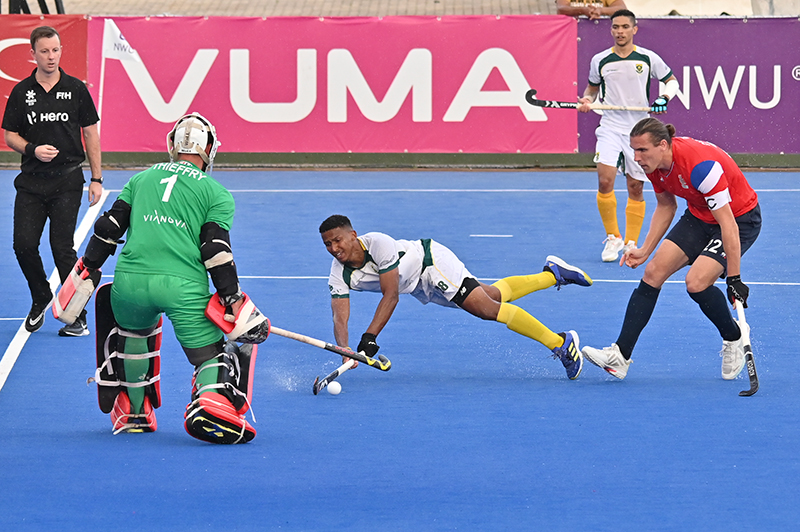 South Africa and France, the two teams to have tasted FIH Hockey Pro League action previously, locked horns in a battle that could see either side re-enter the top tier of the international game. South Africa had opened their tournament with a 6-2 win against Pakistan while France had somewhat surprisingly lost to Ireland. The match marked cap number 50 for Tevin Kok.

The South Africans were enjoying a vociferous home crowd support and sensed the opportunity to get a first win against France in the recent head-to-head. South Africa had two penalty corners in the early exchange, but both were well charged down by the French defense. The South Africans were punished for not taking their chances as a bullet goal from Corentin Sellier gave the visitors the lead.

But as seen many times over the past couple of years this South African team is made of sterner stuff. Ryan Julius hit a wonderful diagonal ball through to Tevin Kok who picked it up and finished superbly. 1-1 at the end of the first quarter!

Both teams had chances with the speed of the South African attack asking questions of the French defense. France won their first penalty corner with six minutes remaining to half-time. Jethro Eustice kept the ball out on the post although they had to refer to overturn a stroke that was incorrectly awarded.

Tempers were starting to rise, and the umpires were themselves being tested as well. Dayaan Cassiem continued to provide danger up front, but his shot was tame. South Africa received a penalty corner on the half-time break after Tevin Kok pulled down a good aerial ball. Jacques van Tonder picked up the rebound but was unable to find the back, however the penalty corner was re-awarded and form the re-award the ball found the back of the net. However, after a referral the goal was correctly disallowed as the ball was off target. 1-1 at the break.

The first short corner of the second half went to France after the ball struck the foot off Sam Mvimbi. But uncharacteristically the French were unable to show their typical danger at a set piece. South Africa showed their own character with a great counter, but Keenan Horne was unable to put the finishing touches on the team move.

France almost regained the lead with a massive opportunity on the overhead. Tynevez one on one with Estiaan Kriek kept the French out before a ripping pass up the other side saw Tevin Kok hit the outside of the post as South Africa challenged the French defense once more. 15 minutes remained.

South Africa took the lead superbly against the French with a tenacious goal. Luke Wynford responded to a superb save and Keenan Horne was on hand to bundle it home and give the hosts the lead for the first time in the game. France almost pulled level but the ball narrowly missed the South African goal.

France were desperate to pull level but the South Africans were keeping them at bay and France decided to withdraw their keeper for the final two minutes. South Africa though held the French at bay and as a result secured the victory and a place in the Semi-Final!!!!

Images from this event on photofrog