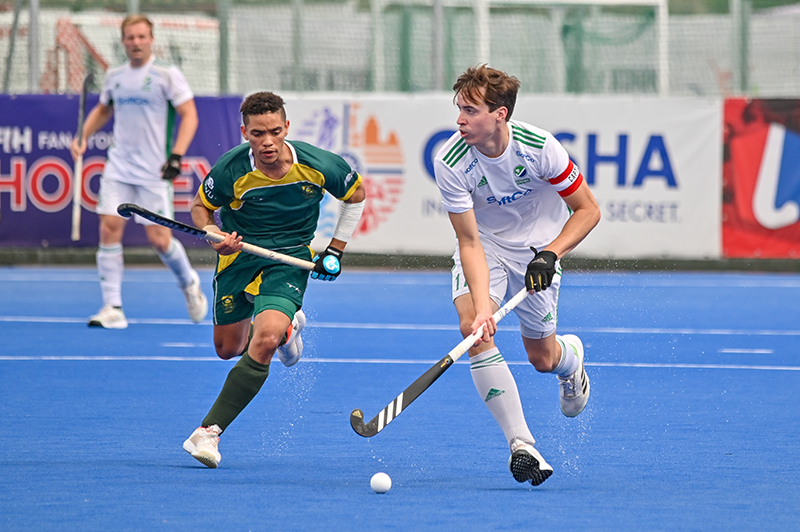 Having already qualified for the semi-finals ahead of their meeting this afternoon, Ireland and South Africa took to the turf at the FIH Hockey Nations Cup to decide who would qualify as the top team from Pool A. Ireland made the first move in this chess battle between the two traditional green sides. They won the first penalty corner of the game and followed it with the second which led to a goal for the visitors. Shane O’Donoghue fired a bullet home that gave the Europeans the early joy.

South Africa’s best moment of the opening quarter came from Dayaan Cassiem who produced a superb run and created space before firing narrowly wide. It was Ireland 1-0 at the first interval.

South Africa had a penalty corner, but Guy Morgan’s chance was charged down and deflected out as South Africa sought out an equalizer. South Africa used their referral to win another penalty corner. This time Connor Beauchamps improvised shot went narrowly wide. Ireland was continuing to test the hosts though looking dangerous every time they went forward.

It remained 1-0 at the half-time break. It was proving to be a bruising battle as the physicality of the game started to rise along with the temperature. The umpires were being asked to keep a tight lid on the affair as it threatened to boil over. South Africa had the ball in the back of the net but the replay was sent to the video umpire who overturned the goal as it didn’t touch Keenan Horne’s stick.

1-0 with 15 minutes remaining. South Africa was having a lot of possession but was showing signs of impatience in looking for the equalizer. The game though was desperately looking for a moment quality and South Africa were gifted it when they were awarded a penalty corner with 90 seconds remaining. However another referral saw the opportunity disappear and with that the result was settled for the Irish who sealed top spot in Pool A.