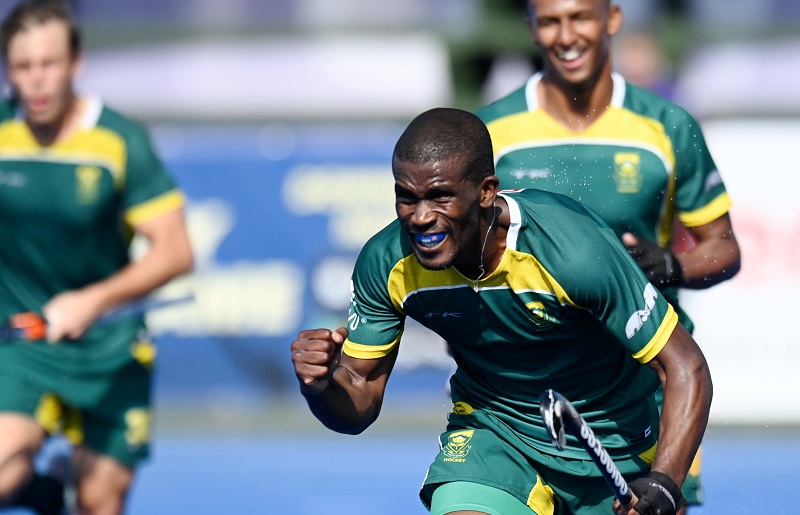 The South African Hockey men kickstarted their life in the FIH Hockey Nations Cup and life under Cheslyn Gie against Pakistan at North West University in Potchefstroom. The game marked the debut for Luke Wynford as well as the debut as captain for Dayaan Cassiem.
South Africa and Pakistan had a fierce rivalry in recent tournaments having met at the Commonwealth Games at the Azlan Shah Cup in 2022 with the hat-trick completed here in South Africa.

The opening exchanges were awash with opening game of the tournament vibes as neither side showed any sort of domination, but it was South Africa who were awarded the opening penalty corner of the game after 10 minutes. It was 1-0 to the South Africans from the corner. Jacques van Tonder struck the upright but was on hand to finish when the ball was passed back to him for a massive bulge in the net.
Unfortunately for the hosts it was a lead they would relinquish just 3 minutes later as Pakistan broke up the field and picked out Rooman who finished past the onrushing Anton van Loggerenberg as the opening quarter finished 1-1.

Another successful referral gave the South Africans another opportunity from the penalty corner a minute later. Connor Beauchamp made the first attempt but when Dayaan Cassiems shot was saved Sam Mvimbi reacted to fired home instinctively. 3-1. That would remain the score at the half-time break

Despite a yellow card for Mustapha Cassiem South Africa was limiting the opportunities for the Pakistani’s and holding possession effectively. And they ramped home the advantage with a Tevin Kok field goal to make it 4-1. Brad Sherwood made a great run, and his reverse ball was superbly deflected home by Kok. Lifted by that moment Kok then won South Africa a penalty corner, which was shortly followed by another. Both chances were not capitalized on by the hosts. With one quarter remaining it was 4-1.

South Africa couldn’t have asked for a better start in the final quarter as Dayaan Cassiem received an overhead and pulled it out the air only to slide it through and stretch the lead. It could have been another when Cassiem put Kok through, but a good save denied the goal.
Pakistan finally scored a goal, but it was correctly chalked off as the striker had infringed on the 5m. A good advantage from the umpires however in the next passage of play allowed Pakistan to get their goal and offer the slightest glimmer of hope.

But that glimmer was doused by a professional South African performance and a quick counterattack by the South Africans saw Dayaan Cassiem fire in the ball and Keenan Horne brilliantly get onto the end of it.

It was a wonderful performance by the South Africans and the outstanding statement result on day 1 of the action in Potchefstroom.