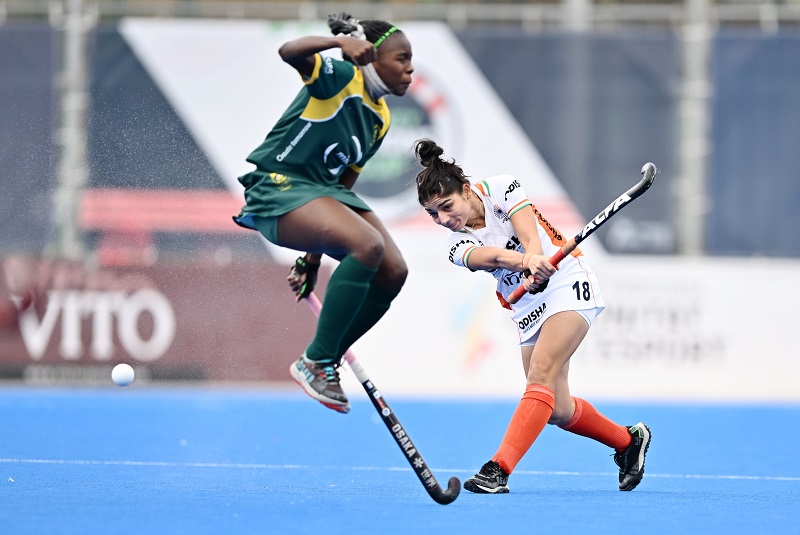 After a rest day the South Africans and Indians renewed hostilities in the Summer Series at UCT Hockey. India would seal the series with a victory while South Africa would need to win to take the series to the final game.

Once again South Africa were plagued by a slow start trailing in the opening 100 seconds of the game. The goal would have been frustrating for the South Africans who were desperate to start the test better, but once again found themselves chasing.

The second quarter has been a frustrating and tough quarter for the South Africans in the series so far conceding 9 goals in the opening two games. Today was slightly better as the defensive awareness improved, but it was frustrating once again as they conceded two more goals to trail 3-0 at the half-time break.

Ekka Deep Grace fired a low hard drag flick into the bottom left corner to make it 2-0 and just two minutes later earlier doubts may have resurfaced as India made it 3-0. South Africa failed to clear the ball on the left side of the defense and when India fed the ball into the circle Katariya Vandana edged in front of her defender and snuck the ball home.

While the second quarter has been a tough learning office for the South Africans, the third has been their most resolute of the series as they once again denied and frustrated the Indians for 15 minutes.

Despite that good work, early in the fourth quarter the South Africans failed to clear their lines and Sangita took advantage with a fine reverse stick strike. The South Africans were able to deny any further goals as the game petered out to a final score of 4-0. With that result the Indians had also sealed themselves a series victory with a game remaining.

South Africa will now play a friendly against Netherlands, the world champions, before completing their Summer Series campaign with a final test against India.