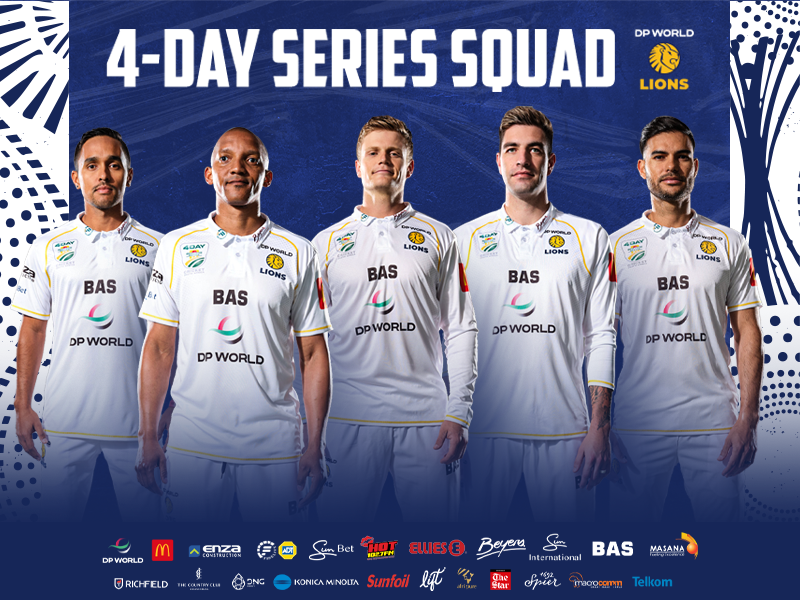 November will see the DP World Lions take on the North West Dragons away, and the Momentum Multiply Titans at home in the CSA 4-Day Cup. 100% focused on the competition that everyone wants to win, the team is fit, determined and ready to break records.

Team captain and 32 year old Dominic Hendricks says it’s the most valuable trophy because it’s the toughest to win;

“Our squad is really looking forward to getting going this week in Potchefstroom. We want to make a good start – which we did successfully last season but didn’t see it through having lost on the last weekend to the eventual competition winners. First up though is to lay a good foundation – and then the challenge to every single one of us is to be more consistent throughout the season.”

All-rounder Wiaan Mulder says he has tremendous belief in the strong squad;

“We’ve played really well in this competition in previous seasons so we’re an excited unit at present. With many of our Protea players returning, I believe we have a good chance of performing well. The T20 brought us closer together as a team – learning to work as one in order to capitalize on the crunch moments. No matter the format, we need to remember to execute the basics best – that’s how trophies are won. We know the importance too of our senior players – and the key role they’ll play in future campaigns. On a personal level, I don’t focus on specific runs or wickets – I just want to contribute as much as I can to us winning as in the end, that’s my ultimate goal: To take as much as I can from this experience and give back as much as I am able to. The team goals are to find a way to win. Looking at the T20’s, we had a couple of games that were extremely tight: That’s the time we needed to deliver. We need to strive to win (or come as close as possible to winning), every session – and if we are to lose a session, not lose by too much. We must stick to the basics, play in the moment and do our best – as a team.”

Hendricks concludes that there are big expectations to really do well in this competition;

“We have a strong squad and will be seen as tough competitors.  I have no doubt that we will not only start well but continue to perform to the high standards set throughout the season. Consistency is key.”

When scanning the records, last season’s top Lions batsmen were Ryan Rickelton averaging 82, and Mitch van Buuren averaging 79. Bowlers who claimed the most scalps were Malusi Siboto with 24, and Duanne Olivier with 29 – both at an average of 14. The Pride is hungry: Hungry to stake their claim in the final 11, hungry to perform, hungry to break records, hungry to win. So watch this space.

Fans from far and wide are warmly encouraged to come support #ThePrideofJozi in the red ball campaign – for more information, please follow @LionsCricketSA.