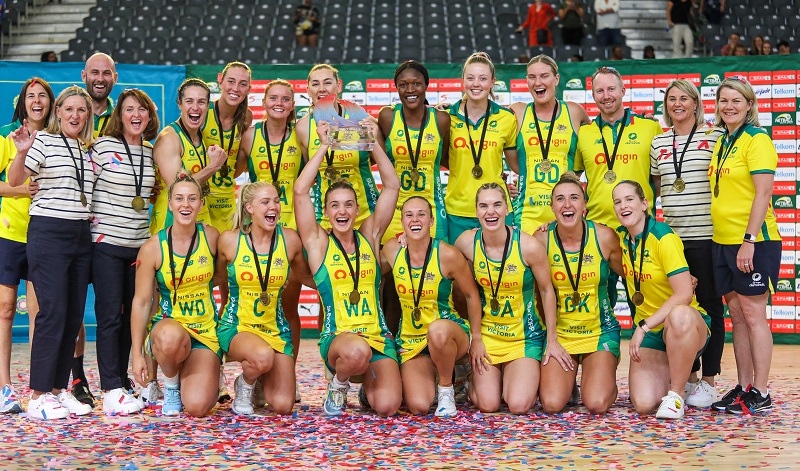 The 2023 Quad Series final was a repeat of the Constellation cup, the only difference being the venue, the Cape Town Convention Centre. Australia came into the match unbeaten in the competition, and New Zealand were looking to bounce back following their round robin defeat against the top-ranked side. Australia showed their mettle, coming from behind in the first half to win the game 56-50 and defend their title.
New Zealand was in control of the game in the first quarter with a four-goal lead, but the Diamonds’ defensive pair of Courtney Bruce on Goal Defense and Sarah Klau on Goal Keeper pulled out all the stops in destabalizing the Ferns’ attack, as they struggled to find Goal Shooter- Grace Nweke in the circle. The exerted pressure saw Australia close the gap to just one goal at half-time. The tables turned in the third quarter, when New Zealand battled to keep up with the increased tempo from Australia, which also led to scenes of uncharacteristic misses from Grace Nweke under the post, as the Diamonds took a 44-40 lead. The Silver Ferns’ were denied a goal due to confusion from the umpires but that still wasn’t enough to overcome an indestructible Diamonds team.

In the 3rd/4th place playoff match, England’s talisman Jade Clarke, ran onto the court for her 200th cap today against South Africa. A 49-42 victory for the Roses and a bronze medal was a great fit for the occasion. Both teams got off to a robust start, with the home side playing to the crowds’ boisterous energy throughout. Layla Guscoth, Francesca Williams and Geva Mentor’s ferocious defense made it hard for the Proteas to find circle edge in the opening quarter, but South Africa were able to regroup and draw level in the first quarter.
A defensive battle across all thirds meant both teams shared equal time in possession at half-time, but a couple of unforced errors allowed the Roses to take a narrow two-goal lead. SA coach Norma Plummer’s changes only came in the third quarter when captain Bongiwe Msomi was moved to Wing Attack from Centre, Khanyisa Chawane took over the Centre role and Shadine van Der Merwe came on and played Wing Defense. The changes yielded better drives from the Spar Proteas, but the Roses continued to show grit and determination in protecting their two-goal cushion even at the end of the championship quarter.

It was all to play for in the last fifteen, because unlike the 46-all draw between the two sides on Sunday, someone had to walk away with a bronze medal. Roses’ Goal Defense Funmi Fadoju’s elevation and hands posed challenges for South Africa in their own circle, which pushed Plummer to bring in Ine-Mari Venter on Goal Attack after giving Nomfundo Mngomezulu a bit of time on court. The hosts were also handicapped by too many turnovers due to ball placement in their goal third and shooting circle, and ended up being punished by England’s conversions from the gains to win the match by seven goals.

Plummer will have to wait a little bit longer to secure her 100th win as an international coach. There is lots of work to be done ahead of the Netball World cup in July for the Spar Proteas, having lost three games in the tournament and drawing against England in round two, but there are also many positives to take, looking at how far the team has come.