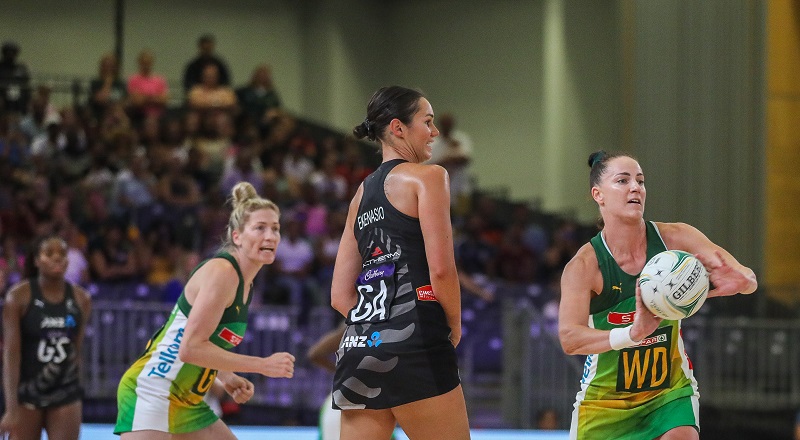 The 2023 edition of the Netball Quad Series was ushered in this afternoon at the Cape Town Convention Centre, with the South Africa and New Zealand game. Thousands of spectators were in high spirits, adding a fervent atmosphere to the arena as four of the best nations battled it out on the opening day. The hosts, however, started their campaign with a defeat after losing 41-61 to the Silver Ferns.
Both teams were raring to go in the first quarter, setting their intentions clear from the onset. It was pretty much an even affair in the beginning as the players were slowly settling in, but it was New Zealand who managed to enter the first break with a four-goal lead. The intensity of the match was heightened by the Spar Proteas’ experienced defensive duo of Karla Pretorius on Goal Defense and Goal Keeper Phumza Maweni, who worked tirelessly to turn ball by applying immense pressure in the oppositions’ shooting circle. New Zealand continued to protect their cushion through a relentless young Grace Nweke but South Africa were determined to fight back.
New Zealand coach- Noeline Taurua broke the game open in the third quarter, making six changes to her side, including the introduction of Jane Watson, who returned from maternity leave. South Africa were stunned by the Silver Ferns who became more potent and extended their lead to ten goals in the first four minutes of the championship quarter. The rattled behaviour of the Proteas caused some unforced errors upfront and twenty turnovers at that point, prompting coach Norma Plummer to finally make her first change. Ine-Marie Venter took over the Goal Attack bib from Nichole Taljaard.
A mammoth task lied ahead for South Africa in the final fifteen minutes as they were trailing by twenty goals. Two mid-court changes were certainly what the home side needed. The injection of Refiloe Nketsa at Centre and Monique Reyneke at Wing Defense brought some fresh legs onto the court as SA fired up in an attempt to close the gap. Unfortunately, time was not on the Spar Proteas’ side, as they managed to salvage an eleven all draw in the last quarter but still went on to lose the game.
‘’I’m pleased we are out there. Australia and New Zealand have had a Constellation cup, five games. England came in and played New Zealand for three games as well as Australia. England also played Jamaica. We, have played a team that is ranked thirteenth and a team that is ranked thirty-five. The Diamond Challenge has to be better quality, for the team to actually pick up the pace’’, said Plummer after the game.
The second game between world number one – Australia and England wrapped up the day, and the Diamonds proved yet again why they are the top ranked side after being on the back-foot in the opening two quarters and walking away with a narrow 61-55 victory. It was indeed a bone of contention throughout the sixty minutes, with both sides spending equal time in possession, but the fifteen gains and eight intercepts that Australia claimed in total rewarded them a much-needed six-goal victory in the end.