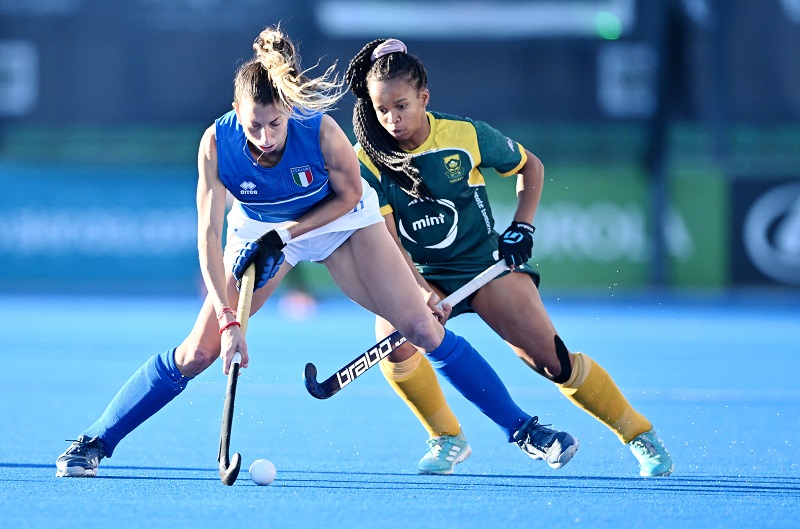 South Africa and Italy were both disappointed to have missed out on the top 4, but needed to dust themselves off to try and finish the tournament on a high and finish as high as possible at the inaugural FIH Hockey Nations Cup.

The two teams had played two warm-up tests before the tournament with a draw and a South African victory giving the African nation hope ahead of this game, but they couldn’t have asked for a worse start as they conceded in the opening two minutes. It was the kind of shot that van Deventer will be disappointed she was unable to keep out.

Italy won a rapid succession of penalty corners, but they were well defended and an exciting break from the ladies in green and gold threatened to produce before simmering out.

In the second quarter South Africa created several half chances but were not able to test the Italian keeper from any chance, much to their continued frustration. And despite showing far more determination and desire the half time break arrived with Italy still holding a 1-0 lead.
South Africa should have punished Italy early in the second half when Taheera Augousti produced a moment of magic but there was nobody attacking the back post. South Africa were ramping up the pressure and starting to create opportunities. The pressure eventually mounted and South Africa won a penalty corner. The shot fell to Thati Zulu but fired it narrowly wide as the Italian charmed life continued.

However completely against the run of play the Italians showed their more clinical finishing ability with a powerful drive past van Deventer and into the netting. It was a sucker punch for a South African team that were more deserving of an equalizing goal than the concession of another.

It was a game with many positive glints of hope for the South Africans, but more frustration as the goals continue to be difficult to come by in major tournaments.