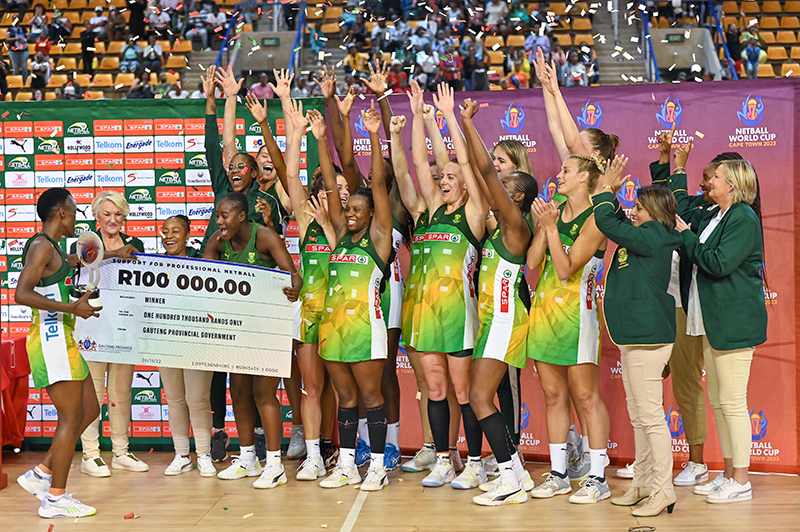 The final day of the 2022 SPAR Diamond Challenge saw Zimbabwe taking on President’s XII team for the 3rd/4th play-off spot while SPAR Proteas took on Scotland in the final match.

While President’s XII are in this tournament as an invitational side, they have really been pushing all the teams all the way to the wire. Sameshia Esau fielded her strongest side on the day against the Gems of Zimbabwe who are also high on confidence. They narrowly missed a win against Scotland losing in the dying seconds of the match.

President’s XII won the first two quarters and putting Zimbabwe under enormous pressure – by the time the game went to half time, they were leading 27 -20. Zimbabwe came back strongly in the championship quarter however it was the South African team that came out very strong winning the match 49 -43.

The penultimate match of the day and tournament saw South Africa facing off against Scotland. Hosts South Africa came into this match highly confidence as they haven’t loss thus far.

The Scottish Thistles had to dig deep on Friday when they drew 41 all against Zimbabwe. They are meeting SPAR Proteas for the 12th time and hoping to break their winless streak.

The first quarter was closely contested with SPAR Proteas only managing a 10 – 8 lead. Scotland came back stronger in the second quarter and taking a lead for the better part of the quarter; however, the experience of the South African team kicked it as they restored the lead winning the quarter 14 -12 and going into half time leading 24 -20.

SPAR Proteas head coach Norma Plummer made some wholesome changes going into the championship quarter, she put all her benched players on except for Izette Griesel.

SPAR Proteas continued to dominate the game and further extending their lead by eleven points as compared to Scotland’s eight. It was South Africa who were crowned 2022 SPAR Diamond Challenge champions after winning the match by 54 -36 against the Scottish Thistles