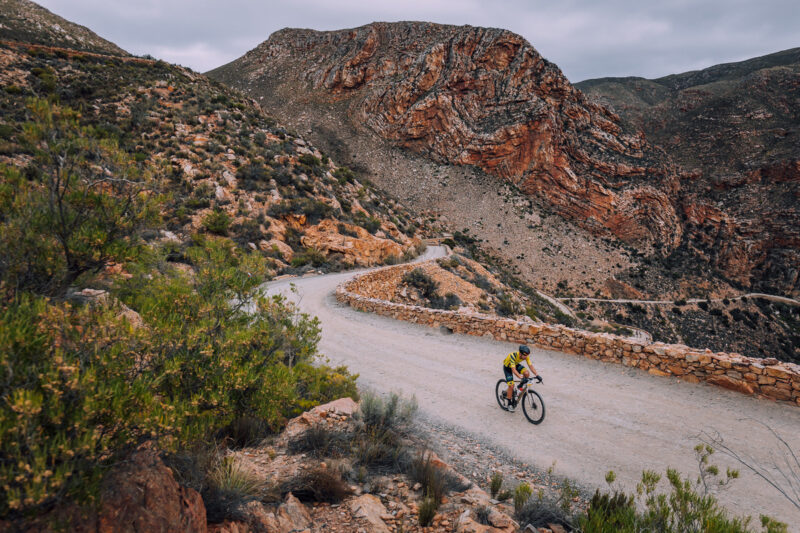 The inaugural Prince George Monumental 100 Miler took place on Saturday, 15 October 2022. Tristan Nortje and Yolande de Villiers were crowned the first king and queen of Klein Karoo gravel racing; having raced to victory across the 165 kilometre long course, which started in Prince Albert and finished in George. Nortje was joined on the men’s podium by HB Kruger and Keagan Bontekoning. While the women’s top three was completed by Catherine Colyn and Juanita Mackenzie.

Starting in Prince Albert ensured that the race was always going to be tough, as the course took in the Swartberg Pass’s northern ascent right from the off. With the climb to 1 500 meters above sea level dominating the route profile the rest of the race, appeared on paper, to be a downhill drag to the finish at Blanco School in George. Cycling is never quite that easy however and a rising south easterly ensured that the iconic pass was in fact one of the easier sections of the day. As the morning wore on to afternoon the wind gradually strengthened, tugging relentlessly at the slower riders as they ground their way towards the Montagu Pass.

Head wind aside, the route was beautiful. Rolling Klein Karoo gravel roads, with surprisingly smooth surfaces, linked the southern foot of the Swartberg Pass with the northern portal to the Montagu Pass. It was perfectly designed for gravel bikes with a few technical, off-piste, sections thrown in to toughen it up.

In the elite men’s race, the majority of the field were on gravel bikes; including Kruger and Rossouw Bekker who had just returned from the gravel world championships. Only Bontekoning and Marco Joubert started on mountain bikes. Though the Insect Science rider equipped his with a set of gravel wheel and tyres, while the Imbuko {type}DEV man rode his Giant Anthem in its standard marathon/stage race set up.

“I just couldn’t keep up with the gravel bikes,” Bontekoning confessed. “I was spinning out and they just rode away from me, even though I had a 38 tooth chainring.” He was not the only one to find matching Nortje difficult however. The Toyota Specialized rider targeted Matthys Beukes’ Strava KOM up the northern side of the Swartberg Pass and went out hard from the end of the neutral zone. Setting a time of 51 minutes and 8 seconds from the T-junction off the Prince Albert tarmac road to Die Top, Nortje claimed the King of the Mountain prize.

Kruger was second over the summit, followed by his Valley Electrical Titan Racing teammate, Keyser, and Bontekoning. The top two riders bettered Beukes’ old record. Over the summit Nortje sat up, allowing Kruger to regain contact and the pair then worked together for a significant portion of the route, before Nortje upped the tempo once more and rode to a commanding victory.

“It was 165 kilometres of headwind and the last hour was in the rain, so it was lekker” he grinned, clearly having taken a masochistic pleasure from the tough day on the bike. “The last descent was a lot rougher than I expected too, I’m sure there were people cramping on the Montagu Pass descent rather than on the climbs because the washed-out surface made it nearly impossible to ride it fast on a gravel bike.”

Nortje’s winning time was 5 hours, 49 minutes and 45 seconds. He was the only rider to dip below the 6 hour mark. Kruger was second, 12 minutes and 17 seconds down, with Bontekoning a further 2 minutes and 29 seconds back. Joubert and Keyser rounded out the top five.

In the women’s race Colyn was the fastest to the summit of the Swartberg Pass. The Rocacorba Collective rider claimed the Queen of the Mountain hotspot prize but was caught on the descent towards the Klein Karoo by De Villiers. With thick mist limiting visibility and overnight drizzle making the surface treacherously slippery the gravel bikers could simply not match the mountain bikers on the descent. De Villiers knows the pass like the back of her hand and even managed to beat her own personal best from the summit to Kobus se Gat, despite the difficult conditions.

“After catching Cath [Colyn] on the descent we stayed together until just before we turned onto the Lategansvlei road,” De Villiers explained.  “That section was quite fun, but once we turned east it became very tough. From Highgate, at 95 kilometres, to Herold, at 145 kilometres we rode into a terrible headwind. I must confess, I really struggled there. The last climb above Blanco, on what they call the contour road, nearly broke me too. But I believe this race has great potential. It’s challenging, includes two iconic mountain passes and takes you from the Great Karoo to the Garden Route. It’s a winner.”

“We’re very happy with how the inaugural Prince George Monumental 100 Miler played out,” Carel Herholdt, of Dryland Event Management, smiled. “Conditions were certainly challenging and everyone of the 254 finishers had to dig deep to earn their medals. It’s a great start though and we can’t wait to build on the success of the 2022 race.”

To sign up to receive information about the 2023 edition please visit www.princegeorge.co.za.