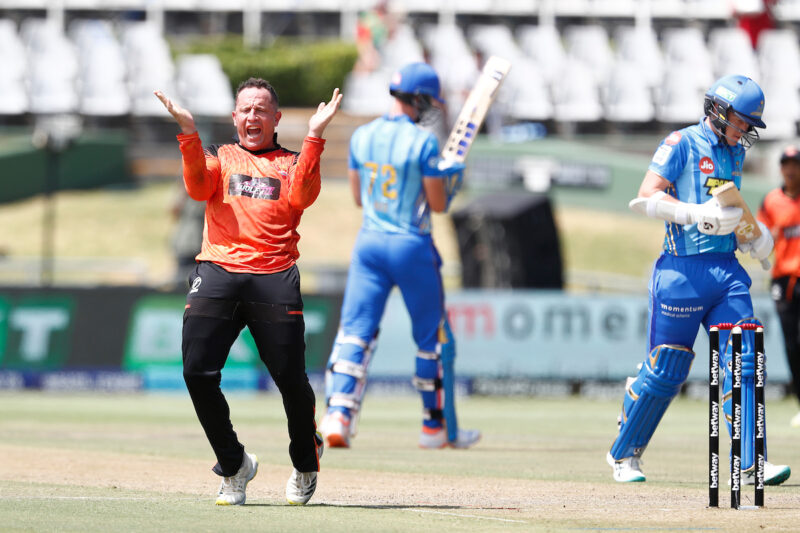 Sunrisers Eastern Cape all-rounder Marco Jansen turned the Betway SA20 on its head with a whirlwind innings that shocked MI Cape Town by two wickets at Newlands on Wednesday.

The visitors were staring down the barrel prior to Jansen launching an assault that will be remembered for a very long time.

The 22-year-old smashed 66 runs off just 27 balls, with 28 runs coming off a single Rashid Khan over – to swing the momentum in favour of the Sunrisers.

The MI Cape Town captain was dispatched for four sixes and a boundary in the 16th over.

“At that stage, we had to make a plan, we had to pick one bowler. After the first ball went for six, I just decided to see what happens and try and go with it,” Jansen said post-match.

Sunrisers captain Aiden Markram had opted to put the home side in to bat after winning the toss and his decision paid off when Sisanda Magala removed Dewald Brevis early on.

Grant Roelofsen (56 off 36) and Ryan Rickelton (46 off 36), however, rebuilt the MI Cape Town innings before Ottniel Baartman (2/21) dismissed the pair in the space of three deliveries.

Roelof van der Merwe (2/21) followed suit when George Linde and Sam Curran fell in consecutive balls but the home team rallied back to post 171/6 at the break.

The Sunrisers’ chase went off track from the outset as they lost four quick wickets before the big-hitting Tristan Stubbs began the recovery with 28 off 21 balls. The Proteas T20 International was, however, run out by Sam Curran to put MI Cape Town back in charge.

But that was before the Jansen blitz and the Sunrisers can now momentarily celebrate getting off the basement of the log.