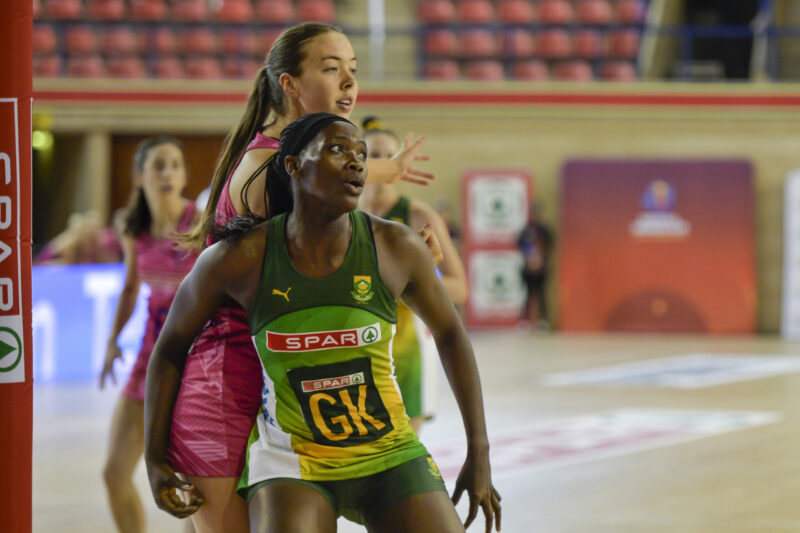 The 2022 edition of the SPAR Diamond Challenge kicked off at the University of Pretoria’s Rembrandt Hall. The opening match was between hosts South Africa and Scotland.

The two nations were meeting for the 11th time and SPAR Proteas have never lost a match against the Scottish Thistles in history.

Norma Plummer who was unveiled by Netball South Africa as SPAR Proteas head coach took charge of her first match since 2019 and fielded a very strong starting seven.

Lenize Potgieter who had been absent from the SPAR Proteas set up for two years made a welcomed return upfront paired with Elmere van der Berg.

It was the SPAR Proteas who were very dominant for the better part of the match winning all three quarters and Scotland put up a good fight during the last one 16 – 14. This was a little too late as South Africa clinched the game 61 – 42.

SPAR Proteas centurion and Goalkeeper Phumza Maweni put up a stellar performance in defence to earn herself player of the match accolade on the day.

Norma Plummer had this to say after the match “the game was pretty useful for us today; we tried out a few moves and combinations – I think it was a bit patchy at times but with quarter we got better especially after giving players feedback and they were putting it together nicely. I think the players did well, we gave all the twelve players a run especially in the last quarter when we were firmly in control of the game. We still have a long way to go before we can be fully strapped up for the World Cup.”

South Africa will take on neighbours Zimbabwe on Wednesday for their second match of the series. Zimbabwe Gems played against the invitational side President’s XII. It was the President’s XII that came out on tops winning the match 55 – 50.